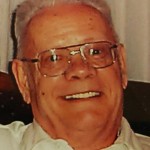 Born in Freeland February 9, 1927 he was the son of the late Jacob and Jenny (McFarland) Feussner.

He was a WW2 Air Force veteran who loved to work, hunt and fish.

Roy was the owner / operator of Feussner Ford, Freeland that his father purchased for his family in 1941. After the war they started working on vehicles and sold Hudson’s and Mercury, and in 1953 became a new Ford automobile dealership.

He was a life member of the American Legion post 473 and VFW post 5010 and a past master of the Arbutus Lodge #611 and a member of the Freeland Industry Development Corporation.

Preceding him in death in addition to his parents was his Wife; Dorothy 2019. Son; Gregory. Brothers; Jacob, Calvin, Johnny, William, George, and Orval. Sisters; Edith, Freidth, Alma, Hellie, and Mildred.

He is the last surviving member of his immediate family.

Services will be celebrated by Rev. Wayne Lupole on Friday 10am at McNulty Funeral Home 494 East Butler Dr. Freeland.

Friends may call at the funeral home on Thursday from 6 to 9pm and on Friday from 9 to 10am.