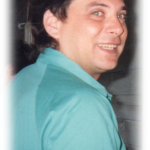 Kenneth M. Delfine 65 of Freeland passed away Tuesday following a long battle with cancer at the home of his daughter in Mountain Top.
Born in Phoenixville, PA he was the son of the late Kenneth Appleton and Jane (Wilson) Delfine.
He was of Catholic faith, graduate of Freeland High School, member (and former commander) of the Sons of the Legion Post 473, member of the Freeland Sons of Erin, and a social member of the VFW Post 5010.
Kenny was employed as a utility worker by Citterio Meats of Freeland for 29 years. Prior to his time at Citterio Meats, he was a member of the Building and Trade Laborers Union Local 215 for 12 years.
He enjoyed horse racing, darts, deep sea fishing, cooking, listening to the Rolling Stones and watching the Philadelphia Eagles. Kenny will be forever remembered as “the Dude”, with his lively sense of humor and infectious laugh.
Preceding him in death in addition his parents was his nephew Zachary Richards.
Surviving are his daughters; Alicia Delfine- Freeland, Christy Laubach and her husband Scott- Mt. Top, and Ashley Sullivan and her husband Beau- Abuurn, PA. Brothers- James and Daniel and his wife Linnea- all of Freeland. Sisters; Karen Delfine- Hazleton and Bridget DeFalco and her husband Frank- Freeland. Grandchildren; Mason Marchetti, Bryce Veet, Carter and Cooper Laubach. Nieces and nephews; Jennifer Delfine- Scranton, Dr. Jamie Delfine-Hiles- Dawson, Justin Richards- Freeland, and great nieces and nephews also survive.
Friends may call at the McNulty Funeral Home 494 East Butler Dr. Freeland on Friday from 5 to 7 pm.