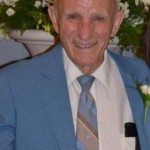 James L. Dei Tos, 90, of Freeland reached his eternal rest on Sunday, May 5, 2019 in Weatherwood health facility surrounded by his family.
Born in Freeland, he was the son of the late Alba and Luigi (Louis) Dei Tos. He graduated from Freeland High School and married Leona Wisniewski on May 10, 1952. He and Leona would have celebrated 67 years of marriage this month. James served in the Army from 1950 to 1956 and was honorably discharged as a disabled veteran after surviving a train derailment in Atlanta, GA.
He worked as a concrete mason/bricklayer for more than 65 years. His talent and hard work can be seen all throughout the town of Freeland and surrounding communities, even into the Poconos. His work includes countless private homes as well as dozens of public buildings including the Freeland Public Library, the Freeland Public Park, the Freeland Borough Building, numerous store fronts of Centre Street, Freeland and Penn State Hazleton Campus.
In addition to his masonry skills, Jim also gave of his time and compassion by volunteering for a number of community nonprofits in Freeland for decades. He was a member of the Freeland Fire Department for over 55 years and was recognized as a ‘Life Member’ for all of his service. He was also a member of the Freeland Fire Police, and was a founding member of the Freeland Northside Community Ambulance, for which he served as a driver for decades.
In 2011, MMI Preparatory School honored him by inducting him into their ‘Wall of Fame’ for his service to the school: “A dedicated parent, volunteer and employee for over 50 years who masonry skills are highlighted by the recognizable steps outside of Old Main.”
He assisted the Freeland American Legion and the Freeland Vets whenever they needed him and was named ‘Citizen of the Year’ by the Freeland American Legion. Jim served on the Freeland/Hazleton School Board and was also a lifelong advocate of the American Red Cross and blood donations. He reached the distinction of a two gallon donor a number of years ago.
Preceding him in death in addition to his parents are his siblings Victor, Richard, Hilda and Flora.
He is survived by his wife, Leona of Freeland; son Nicholas Dei Tos and his wife Patricia of Freeland, son James and his wife Sue of Macungie; his sister Emily Watahovich and her husband Charles of Flemington, NJ; and granddaughters Nina Zanon and her husband Scott of Mountain Top, Maria Wirjosemito and her husband Adam of Little Falls, NJ, and Gabrielle Giuliano and her husband, Bradley of Philadelphia. He was fortunate to meet his great-granddaughter, Cecelia Zanon, prior to his passing.
The viewing will be held Tuesday, May 7th from 6 to 8 p.m. and Wednesday from 11:30 a.m. to 12:30 p.m. at McNulty Funeral Home, 494 E. Butler Drive, Freeland.
Mass of Christian Burial will be celebrated at the Our Lady of the Immaculate Conception Parish, Freeland on Wednesday, May 8th at 1 p .m.
The family would like to thank Dr. Phillip Benyo, Jim’s longtime physician, Heritage Hill and Weatherwood health and personal care facilities as well as the staff of Leigh Valley Hazleton and for all of their kindness and care in the final years of his life.
In lieu of flowers, donations can be made in his memory to one of the organizations that meant so much to him: Freeland Northside Community Ambulance, P.O. Box 33 Freeland, PA 18224; Freeland Fire Department, P.O. Box 28, Freeland, PA 18224; or The American Red Cross, NEPA Chapter, 256 N. Sherman Street, Wilkes-Barre, PA 18702.