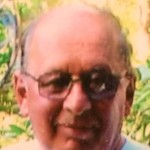 An Eckley native, he was the son of the late George Albert and Mary (Rollins) Barron.

In addition to his parents, he was preceded in death by his wife of 39 years, Dorothy (Letchak) Barron in May of 1997, his brother Emil Barron, and his sister Marie (Barron) Stegena.

and brother John and his wife Carole of White Haven. He is also survived by his beloved grandchildren Brett and Lindsey Barron and Rudy Urenovich, and several nieces and nephews.

He was a member of the former St. John’s Nepomucene Church, Freeland and Our Lady of the Immaculate Conception Parish at St. Ann’s Church.

George was an honorably discharged Army Veteran. He graduated from Foster Township High School and was a mechanic for the former Steckert’s Pontiac in Hazleton,

before owning and operating Barron’s Sunoco station in Drums for more than 50 years. Later in life, he was a devoted grandfather, took great pleasure in taking care of the family dogs,

was an avid Penn State football fan and enjoyed driving around in his signature white Cadillac.

Private Mass of Christian burial will be celebrated in Our Lady of Immaculate Conception Parish at St. Ann’s Church and entombment in Calvary Cemetery, Drums.