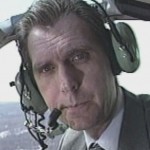 Robert “Bob” Reynolds Jr. 67 of White Haven a 33 year journalist for WNEP-TV 16 passed away surrounded by his 3 angels at Hospice of the Sacred of Heart, Dunmore. He was a fighter over the many years he dealt with Parkinson’s Disease and heart issues.

Born in Wilkes Barre on April 26, 1953 he was the son of the late Robert and Irene (Palka) Reynolds Sr.

He was a member of St. Patrick’s Church, White Haven.

Bob was a graduate of Brick Twp. High School New Jersey and studied at the American Academy of Broadcasting.

Prior to his career at WNEP he was employed for 6 years at radio stations in PA and NJ and was a reporter for WDAU (WYOU-TV).

Bob loved his family, especially getting lots of hugs from his grandchildren. Bob and Paula enjoyed cruising, especially during the better days of his illness. Bob was thrilled when he got permission to transmit from the “radio room” on one trip and always took his HAM radio with him whenever they traveled.

To all of his amateur radio friends:  WB3DYE may now be a is a Silent Key but pay attention to the bands, you never know when you might hear him sending  73’s.

Preceding him in death in addition to his parents was his Son; David Reynolds.

Surviving is his loving wife of  27 years and “chief caregiver angel”, Paula Deignan-Reynolds by whom he is already greatly missed.  Son; Adam Reynolds and his wife Kim. Daughters who were angels to Bob and Paula during his care, ; Christina Reynolds and her fiancé Rick Rogers and Melissa Reynolds-Appel and her husband Joe. Brothers; Marty and his wife Jen and Eddie and his wife Jean. An of course those who were more than Grandchildren…they were his Best Buddies and Princesses; Brianna, Tyler (Tabby), Caroline, Shaylene, Jayden, Koa, Kingston, Syx, Gia, and Edie. Niece; Maddy. Nephews; Max and Chase. Bob leaves behind many friends and his guardians Pookiscammer and Mia (at home).

Paula would like to thank all the medical professionals who took great care of Bob during his illness,  especially the compassionate staff of Hospice of the Sacred Heart in Dunmore both at home and as an inpatient.

Friends may call at McNulty Funeral Home 494 East Butler Dr. Freeland on Thursday from 3 to 7pm for a WALK THROUGH VIEWING no gathering at funeral home due to Covid-19 pandemic. Entrance will be the front door of the funeral home exit will be the rear door signs will be posted for instruction.

No mask no entry.

Friends are invited to graveside services in Calvary Cemetery, 49 South Hunter Hwy. Drums on Friday 10:30am.

In lieu of flowers donations can be made to Hospice of the Sacred Heart 100 William St. Dunmore Pa. 18510 or online at hospicesacredheart.org

Condolences can be email at condolences@mcnultyfuneral.com