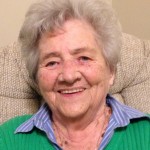 Margaret A. Bobby 95 formally of Freeland a guest at Fritzingertown Senior Living Community passed away early Tuesday evening at Lehigh Valley Hospital, Hazleton.
Born in Jeddo she was the daughter of the late Michael and Anna (Uhrin) Hanusick.
She was a member of the former St. John’s Nepoumence Church and a member of the Our Lady of the Immaculate Conception Parish at St. Ann’s Church- Freeland, graduate of Hazle Twp. High School, and a former president of the Women’s Auxiliary VFW Post 5010.
Before retiring she was employed by the former Freeland Shirt Factory as a seamstress and the White Haven Center in Dietary.
Margaret was Big Phillies Fan an avid Bingo Player who enjoyed going to the casino.
Preceding her in death in addition to her parents was her Husband; Michael July 11, 1976, Son; Michael. Twin infant daughters; Diane and Aileen. Brothers; Michael, John, Andrew, and Emil. Sisters; Mary Mazurick, Anna Miklovich, and Helen Brazino.
Surviving is her Son; Edward and his wife Barbara- Freeland. Daughter; Barbara and her husband Nino Campagna- Tacoma Washington. Sister; Elizabeth Wysocki- Drums. Sister-in-Law; Pat Bobby. Grandchildren; Michele and her husband Larry Keba, Renee and her husband Chip Makowiec, Edward Bobby Jr. and his wife Kristin, Jason Bobby and his wife Nicole, Michael Campagna, and Gabrielle and her husband Alan Heckler. Great Grandchildren; Lawrence, Sophie and John Keba, Michael Makowiec, and Piper, Declan, Colton, Chase, and Beckett Bobby and Jacob and Makayla Heckler. Many nieces and nephews also survive.
Funeral will be held Thursday 9am from the McNulty Funeral Home 494 East Butler Dr. with a Mass of Christian Burial 9:30 in Our Lady of the Immaculate Conception parish at St. Ann’s Church, 898 Centre St. Freeland.
Friends may call at the funeral home this evening from 6 to 8pm. and Thursday morning from 8 to 9am.
Burial will follow in St. John’s Cemetery, Freeland.
In lieu of flowers donations can be made to a charity of one’s choice.