John M. Carr 87 of Freeland passed away Friday at Mt. City Nursing and

He was a member of Our Lady of the Immaculate Conception Parish at St. Ann’s

Church, Freeland, VFW post 5010 (social), and a life member of the Freeland

Before retiring he was employed by Federal Business Products as inventory

Preceding him in death in addition to his parents was Brother; Edward. Sisters; Rose, Patricia, Loretta, and Catherine and  grandson; Brayden

He is the last surviving member of his immediate family.

Surviving is his wife of 64 years the former Mary DeLucca. Daughter; Antonette “Toni”

Private burial will be in St. Ann’s Cemetery, Freeland.

John’s family would like to thank the staff of Mt. City Nursing for their

outstanding care during this difficult time. 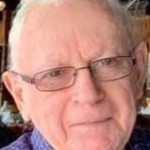