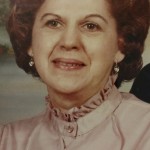 Emily A. Berta, a longtime resident of Freeland, passed away Wednesday at the age of 87.
Born in Tannery, she was the daughter of the late Stephen and Susan Prebula.
She was a parishioner of the former St. John’s Nepomucene Church, Freeland, and currently St. Mary’s Byzantine Catholic Church where she belonged to the rosary society and was a Catechism teacher in both parishes.
Emily grew up on a farm and attended Ripple and Highland Schools, later graduating from Foster Twp. High School.
Before retiring, she was employed by RCA, Mountain Top, and was a housewife of her own home.
Emily, along with her husband, took the traveling Statue of Mary from home to home weekly for 13 years and was a maker of rosaries and scapulars for the missions for many years.
Preceding her in death, in addition to her parents, was her husband of 58 years, Michael G. Berta Jr., who she married in St. Patrick’s Church, White Haven, in 1950. She is also preceded in death by sisters, Elizabeth Deering, Eleanor Rudakiewicz and Dorothy Brezinsky; and brother, Joseph Miller.
Surviving are her daughters, Patricia Kmetz and her husband, Edward (Cal), Freeland, with whom she resided with the past 10 years; Sharon Rish and her husband, Thomas, White Haven; and Deborah Pogirski and her husband, Walter, Freeland; son Michael Berta III and his wife, Jacqueline, Hazle Twp.; sister, Lucy Golden, Whitehall; grandsons, Michael IV, Hazle Twp.; and Nathan Pogirski and his wife, Jacqueline, Lancaster; granddaughter, Kelly Ann Heller (Rish) and her husband, William, Wapwallopen; and great-granddaughters, Savanah Rish and Madeline Heller, Wapwallopen.
The funeral will be held Saturday at 9:30 a.m. from the McNulty Funeral Home, 494 E. Butler Drive, Freeland, with Divine Liturgy Office of Christian Burial, 10 a.m. in St. Mary’s Byzantine Catholic Church, Freeland.
Burial will follow in the parish cemetery.
Friends may call at the funeral home Friday evening from 6 to 8 p.m.