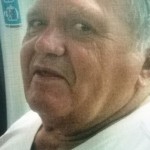 Donald William “Pappy” Peters 81 of Freeland passed away early Monday morning at Lehigh Valley Hospital, Hazleton.
Born in Freeland he was the son of the late William and Anna (Kunze) Peters.
Before retiring he was employed by former Gennetti’s Grocery Store as a Stock Boy, and a master craftsman of home building for John Sabol Homes, Ralph Cameron Homes, and Charles Maso and Sons.
Pappy was a Jack of all trades who loved his children and grandchildren. He enjoyed building homes and woodworking at home on projects for his family, decorating his home for all holidays especially building his train displays at his home, going to amusement parks, attending, watching stock car racing, and traveling to Connecticut on the train.
Preceding him in death in in addition to his parents was his Wife the love of his life Marcia 1997. Sister; Arlene Pollard, Sister in law; Marie Pashinck, and his Cousin; Robert Iacozza.
Surviving is his Sons; Rich- Freeland and Tim and Bobbie- Agmar. Daughters; Carol and her husband Walter Wysocky- Freeland and Judy Kranyak – Drums. Grandchilden; Casey and Brendon Peters, TJ and Tyler Peters, Sara, Matthew, Scott, and Rachel, and Luke and Anya. Great Grandchilden; Kiyomi, James, Layla, Casper, Nate, Kayla, Connor, and Braelyn. Sister in laws; Florence and Jerry Diehl- Hazleton, Wilma and her husband Barry Keller- Florida, Eileen Tanner- Drifton. Brother in laws; Eugene Traub Sr. and Theresa- Hazleton. Cousins; Margaret Shelby- New York and Elaine Antoniti; Connecticut. Many nieces and nephews also survive.
Memorial will be celebrated at the McNulty Funeral Home 494 East Butler Dr. Freeland on Saturday from 1 to 3pm.
Burial will follow in Emmanuelle United Church of Christ Cemetery, Dorrrance.
In lieu of flowers donations can be made to a charity of one’s choice.