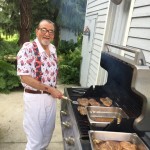 Anthony Charles Facciponti, of Lower Nazareth, PA passed away at the age of 83 on Tuesday, March 9th while surrounded by family in the Lehigh Valley Hospital, Cedar Crest.

Born January 3, 1938 in Pittston PA, he was the son of the late Anthony and Eva (Franchella) Facciponti and grew up in the Railroad St. area of Pittston until the family moved to Carroll Street where he helped his father establish their own neighborhood general store.

He was a graduate of Pittston City High School, class of 1956, and soon after began working as a chef and food service manager for the MW Wood catering company centered in the Allentown/Bethlehem area. He continued his education by taking courses at Penn State, Lafayette, and Northampton colleges. His academic pursuits ranged in subject matters from real estate for which he received his license, as well as courses in machine shop, sanitation, supervisory development, computer programming, economics, as well as his studies in the management of food production and service.

His career was dedicated to feeding people at hospitals and colleges, including Lafayette, Cedar Crest, and Lehigh colleges. He was also quite proud of his opportunities to design and manage banquets for the company’s special events, including dinners honoring Easton’s famous heavy weight boxing champion, Larry Holmes.

After retiring from M.W. Wood catering, he worked several years for Kraft Foods company as a merchandiser. As a member of Grace United Church of Christ and Promised Land Church of Nazarene, he put his culinary skills to work cooking countless meals for the needy and raising funds for the churches. While attending Grace Church, he and his wife, Patricia, also served as cub scout co-leaders for College Hill’s Cub Pack #8.

Anthony, known to his family and friends as “Tony,” valued most his time with family, close friends, and his many beloved dogs on his farmhouse property. For nearly two decades he proudly cooked for them over a large barbecue pit during many gatherings where over a hundred would gather on holidays for memorable Facciponti picnic celebrations. He also enjoyed vegetable gardening, mowing his lawn, collecting antiques, listening to the music of the 50’s with a special love of Elvis Presley, as well as going bowling and hunting.

An avid outdoorsman and patriot of our country’s rich gifts, he regularly took his family camping and traveling our great countryside. Tony prided himself in having visited all but two of our United States and many of its National Parks, as well as traveling to Canada, Mexico and even his ancestral homeland of Italy.

Surviving in his immediate family are his wife Patricia Ann (Heffernan) whom he had dated for more than 3 years before at his age 23 they began their marriage of 60 years. Living are their five adult children: Lisa and her husband Neil Morris, William and his wife Christy, Laura and her husband George Bond, Daniel and his wife Cheryl. and Michele Facciponti. Additionally, surviving are ten grandchildren, three great grandchildren, as well as nephew, nieces and their offspring.

Considering the limitations of these COVID times, there is no public funeral or celebration of life planned. His burial will be at the convenience of the family with the assistance of the McNulty Funeral Home, 494 East Butler Drive in Freeland, PA where his obituary will be posted. http://www.mcnultyfuneral.com

Condolences can be emailed at condolences@mcnultyfuneral.com